Note that this is part 5 of a series. In this installment I ramble on about miscellaneous gameplay features.

In this post I'll showcase a few gameplay features currently present or in progress. The screenshots are too large to fit at full size, so click them to view the full-size versions.

Because the actual game worlds are quite large and filled with so many objects, loading them takes a while. It's not that long but when you're trying to repeatedly tweak new features you want to able to iterate quickly.

To cater for this I have a separate development world with a very basic background, containing a collection of game objects that I can enable or disable as needed. Similar scenes exist for testing game characters, abilities and gear in isolation, but 'dev world' is the one where I spend most of my time.

Occasionally I'll lose focus and get side-tracked on some spur of the moment wild idea that doesn't really contribute to the core game. Although I kick myself for spending so much time getting side-tracked I do think that these arbitrary features end up being interesting mini-games that add character and flavor to the game.

The slot machine was one of these. I spent about 3 or 4 evenings implementing it (it took longer than initially anticipated). The slot machine allows you to spend gold for a chance of winning gear and items. 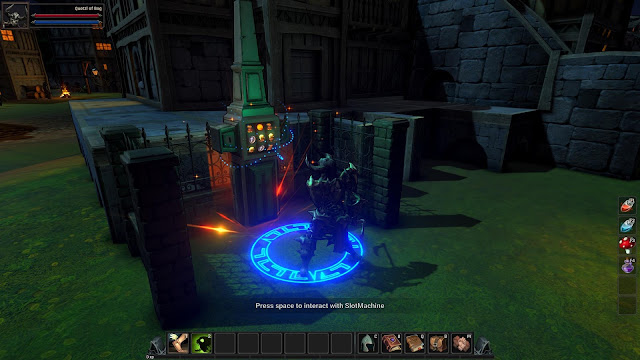 Unlike your typical slot machine game I actually modelled and simulated the individual reels, like an old-school physical slot machine. It's bright and flashy and sort-of at odds with the grim theme of the game, but that's part of it's charm.

Part of what I like about my theme is that it combines dark and gritty with silly and comical. You'll be walking through an ominous graveyard and then come across a dancing skeleton who gets a fright when he sees you. After leaving the graveyard you might stumble upon this bright flashing slot machine. It admittedly feels a bit incongruous but it does add a strange and unusual feel to it all.

Reagents are ingredients that you harvest from certain plants that allow you to craft potions. To help you differentiate between reagent plants and general background plants, the ones that can be harvested are made more prominent using particle effects and lighting. Once you harvest them the special effects are disabled, making them blend into the background like ordinary plants.

The organ harvesting area isn't an area where you actually harvest organs (I thought that would be a bit too disturbing, although I'm still open to the idea). It is a quest area where women and girls from the town have been captured. You need to discover what happened to them. You find them in cages and will eventually need to rescue them. Right now I've not actually implemented that part, so it feels quite gloomy because you see them and hear them crying but can't do anything about it.

The black market merchant you interact with in the town trades in organs, so it makes you wonder whether he is involved in this.

The potion cauldron is where you craft potions using reagents you have collected. I have tried to make it very simple to use, while also trying to give it a tangible feel (as if you are actually interacting with a cauldron). It actually shows the ingredients dropping in and plays a rewarding sizzling sound and fancy liquid splash particle effects.

The rune forge area is not actually implemented yet, but it will be where you can use mined items (items like ore and crystals) to craft 'runes', which can be slotted onto armor and weapons to make them more powerful.

It's still a bit unclear to me exactly how this feature will work so I can't say much more about it right now. Hopefully it'll be splendid!

Lore books are one of the ways in which I expound upon the lore and history of the world. They are typically present near dungeon entrances to give some background information. Occasionally they are also present deep inside dungeons, telling stories about heroes and villains you'll encounter later.

An old friend, Matt Penney, offered to provide some voice acting, and I took up his offer for one of the lore books. I'm very happy with the results and am hoping he'll be amenable to providing more. Here is a link to the sample:

These mysterious artifacts serve a purpose that not even I know yet. They'll probably give you some boon or buff. The reason I'm still undecided on what to do with them is that you already have so many skills, abilities, brews and potions that give you buffs. Yet another buff-giving item feels inconsequential, so I'm still mulling over it.

I've divided character abilities into a set of shared abilities and class-specific abilities.

Shared abilities are things like 'dash' (which allows you to sprint for a while and navigate through the world more quickly) and 'illuminate' (which summons an orb of light to illuminate dark areas).

Class-specific abilities are obviously thematically related to the specific character. I've only got about one or two per class at the moment, and some of them are still works in progress.

When showing the game to friends and colleagues I often get conflicting advice. Some want it more colorful, others advise making it grittier. Some like outlines, others don't. Some like intense bloom, others hate bloom and want it subtle to the point of almost not being present.

To deal with this nightmare I just chose to make all of these configurable via the graphics options. Outlines are optional, bloom intensity can be specified by the player, and there are several color schemes available (normal, grim and colorful).

I started work on supporting multiplayer right from the start. It worked well at the time with the limited feature set present, but unfortunately, in trying to get the game fleshed out I've neglected it for a while. Nevertheless support for multiplayer features is somewhat present.

My initial intention was to have an MMO feel where you'd explore the town and other players would be exploring with you. I may still go this route, but if it proves too complex I may fall back to you exploring alone but then forming a raid party which invites other players to enter multiplayer mode to raid a dungeon together.